"Ayahuasca grew thanks to our father. He took out a hair from his head and planted it in the rainforests of Putumayo. The Ayahuasca grew and God prepared it, he drank it and suffered. After, he went to heaven and left Ayahuasca for us.

It advised us how to live well by recognizing our mistakes, not treating others badly and living in happiness and harmony. From Ayahuasca comes our thought, it helps us to think with our heads and with our hearts. We also learnt our language through Ayahuasca which we use to give names to our reality. God left us Ayahuasca to save humanity.

Ayahuasca is the Quechua word for the Banisteriopsis Caapi (Ayahuasca) vine native to the Amazon rainforest. Literally translated it means “vine of the soul” and, combined with another sacred Amazonian leaf named chagro, it’s been used as a medicine for thousands of years. Prepared and given by a shaman in a ceremonial setting, its purpose is to heal physical, spiritual, and emotional imbalances and traumas. 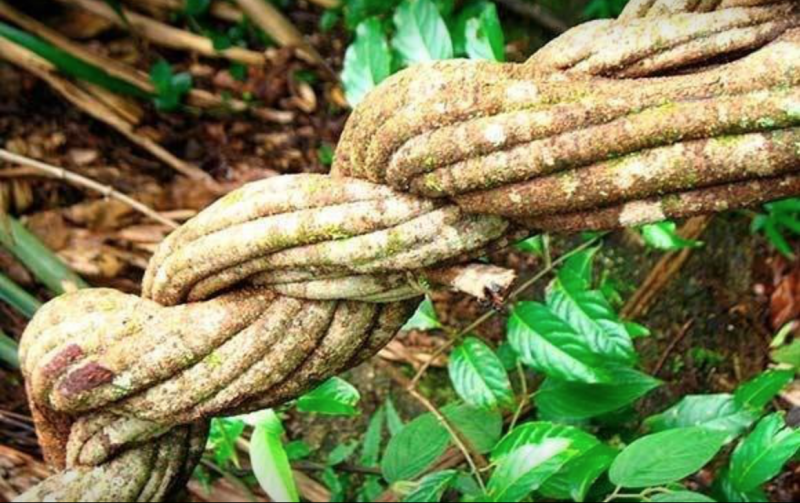 Over the last few decades, Ayahuasca has gained popularity in the Western world. It’s developed a reputation for providing relief from mental health disorders ranging from anxiety and depression to addiction and post-traumatic stress disorder (PTSD). For others, the draw of Ayahuasca is in its ability to create a deeper connection to our own truth, wisdom, and intelligence.

Ayahuasca has the potential to produce extraordinary visions that are experienced during ceremony. It’s these visions that have made the plant mythical in the Western world, but these are not the primary purpose of drinking this medicine. Instead, Ayahuasca is about healing, cleansing, and reconnecting with parts of yourself that you’re unable to access or process on your own.

Ayahuasca is known as Yagé in Colombia and Caapi in Brazil, but its ultimate purpose and main ingredients remain constant across all of its shamanic, medicinal, religious, and spiritual uses.

The Ayahuasca vine and chagro leaves work synergistically to produce healing. The vine contains monoamine oxidase inhibitors (MAOIs), while the chagro leaves contain dimethyltryptamine (DMT). In this synergistic relationship, the MAOIs in the vine prevent your stomach from breaking down the DMT of the chagro so it can be absorbed by the body.

Scientifically speaking, DMT is a hallucinogenic alkaloid that causes the altered states of reality and perception associated with Ayahuasca. It has a powerful affect on the central nervous system and on the visual cortex. This is what creates the feeling of being rewired from the inside-out, as well as the strong visual component of an Ayahuasca experience.

Science tells us that DMT is the active principle in Ayahuasca, responsible for the change in visual perceptions and altered states of reality. But, from a shamanic and spiritual standpoint, DMT is much more than that; it helps to activate what is already inside of us.

DMT can be found in nearly every living organism on earth, including humans. For us and other mammals, the biological production of DMT is located in the pineal gland: a small gland located in the center of our brain. The location of this gland corresponds with spiritual understandings and concepts of the “third eye”.

In a number of religious texts and teachings, the third eye is the seat of the soul and the part of the human body that connects our everyday consciousness with the divine consciousness. It’s from this gland that spiritual and mystical experiences take place, and it’s associated with everything from dream states and near death experiences to astral projection and visiting alternate dimensions.

Western doctors are only now starting to acknowledge what the shamans working with Ayahuasca have known for thousands of years: traumatic events are stored in the bodies’ cellular memory, and this can lead to physical, emotional, and mental health conditions.

In psychology, trauma is understood as an event which causes an overwhelming amount of stress that exceeds ones ability to cope . This might include anything from a sexual assault to being diagnosed with a potentially terminal illness to experiencing damaging events in childhood.

When we experience these traumas, that residual energy stays in our bodies on a celular level and is expressed in a number of symptoms, including anxiety, depression, disassociation, fear, and sadness, which then blocks us from physical, emotional, spiritual, and mental growth.

While we possess an innate healing process that lends us the ability to address this residual energy, it’s not uncommon for people from the Western world to be incapable of accessing that. Not only have we lost our connection to divine consciousness, both Western culture and medicine work to suppress symptoms, instead of validating emotions, feelings, and sensations and working through them.

But those symptoms are important indicators of the internal work we need to do for healing. And, the good news is, that those same residual energies that create the symptoms of trauma, can be engaged in a way that works toward that healing.

This is how Ayahuasca heals. The medicine enables individuals to go deep within themselves to where pain, trauma and disease exist and subsequently release that residual energy. By healing energetic blockages in our mental and emotional bodies, we achieve physical healing as well.

What to Expect from Ayahuasca

As Ayahuasca gains popularity in the Western world, the most often recounted stories involve the intense visions and altered states of reality the medicine works through. But an Ayahuasca experience doesn’t solely take on the form of ‘seeing’. There’s also the potential for experiencing auditory visions, profound feelings or insights, or even synesthesia, where you come to perceive sound and thought energies in the ceremony space.

Sometimes, you can actually feel the medicine healing your body by re-ordering your cellular structure and DNA as well as rewiring your neuropathways. At other times, the medicine targets deeply buried subconscious issues, which are so profoundly hidden that you’re unaware of what exactly you’re working through or what healing is taking place. But Ayahuasca always leaves participants feeling more at peace, with a greater sense of happiness and connection to themselves and the world around them.

Ayahuasca works differently with every individual and, even in the same individual, the experience will be different from ceremony to ceremony. Many have spiritual revelations about the nature of love, life and the universe, or receive messages about their life's purpose. Other times you may travel into the past, future or different dimensions, or make contact with spiritual, deceased, and other worldly beings who act as guides or healers.

In the shamanic tradition, the Taita (Master Shaman) collects the plants required to make Ayahuasca before going onto brew the Ayahuasca.  This is a very important process in which they call on the guardian spirits to protect the medicine and imbue it with healing intentions. This process takes days to complete and, in that time, the Taita will not eat or sleep. Their primary focus is ensuring that the medicine is strong and with pure energy.

During the ceremony, participants will purge the low vibrational energies of their various trauma into the ceremonial space. The Taita is there to act as the dominant energetic force throughout ceremony, directing these energies out of the ceremonial space so they’re unable to interfere with the energetic work of the other participants. Before, during, and after ceremony, he will cleanse and purify the space with the smoke of green tobacco and other protector plants such as, sweet grass, sage, cedar, copal, and palo santo.

Why are Shamans Important?

Shamanism is one of the oldest spiritual practices on the planet. It literally translates to ‘the one who knows’, denoting the important role these individuals play in their communities.

In the Amazonian regions of South America, the traditions surrounding Ayahuascas' medicinal and spiritual use range according to ethnic group and geographical area. This means that the bodies of knowledge regarding the medicine are wide and varied. But across all this diversity, what remains constant is the importance of the Shaman in this process.

Shamans operate on the basis that the world is divided into two realms: the physical realm and the non-physical realm. Both of these realms exist side by side, and, through their extensive and intensive training, the Shaman learns to journey between ordinary reality and the non-ordinary reality of spirits and energy. Both of these realms come into play when working with Ayahuasca, and the Shaman is equipped to direct all the positive and negative energies, spirits, and guides in order to heal the participants in a number of ways.

The importance of working with a Shaman cannot be understated. In the same way that Western doctors study for decades to perfect their craft, Shamans work with the medicine, energies, and spirits of Ayahuasca tirelessly before they can begin to heal others.

Where to Experience Ayahuasca

Since Ayahuasca’s introduction into the Western world, it has grown exponentially. What was once a practice that could only be found in remote areas of the Amazon has expanded outward, and it’s now possible to find ceremonies in the US, Canada, Europe, and elsewhere.

Amazonian Shamanism and Ayahuasca dates back more than 5000 years. This traditional knowledge is passed from generation to generation. And, over many years of training and with the help of the ancestral knowledge(Ayahuasca) which is passed down, the Shaman has learned to communicate with, guide, and act on behalf of the spirits who give their knowledge of how to heal.

Only through that intensive spiritual, emotional, and mental training does a Shaman learn how to wield various energies to heal others as well as how to serve the medicine and safely manage a ceremony. Lacking that arduous training, or receiving training from sources with misplaced intent, others are often not equipped to manage the flow of energies and support the participants, especially in cases when the experience becomes more challenging.